Cyclone is a new class of femtosecond fiber laser for two-photon microscopy. It is a new proposal, it is differential. Powered at the core by FYLA´s proprietary technology, it enables the simultaneous excitation of the largest variety of fluorescent probes. It provides images with higher brightness. It introduces a new era of simplicity and cost.

Cyclone provides an extremely wide spectral bandwidth which expands in the NIR across the 900-1200nm spectrum. This overlaps with the two-photon excitation spectra of most green and red-shifted fluorescent labels, including eGFP, mRFP and DsRED. This remarkably exceeds the range of fluorescent labels that can be simultaneously excited with conventional femtosecond lasers, including broadly tunable lasers and single-line femtosecond fiber lasers.

Cyclone offers a highly flexible and versatile solution or two-photon excitation fluorescence microscopy, enhancing the features that can be imaged simultaneously on a sample, of particular importance for in-vivo and ex-vivo microscopy. 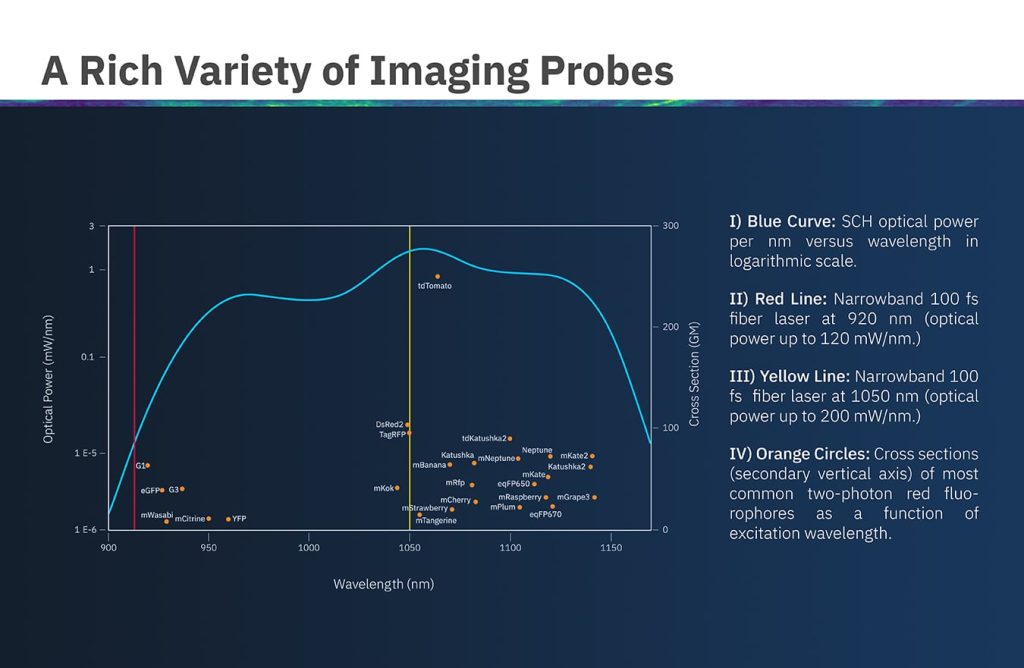 An image of a pollen grain using the pollen autofluorescence excited by the Cyclone laser shows the great image quality and simultaneous excitation at different spectral channels. 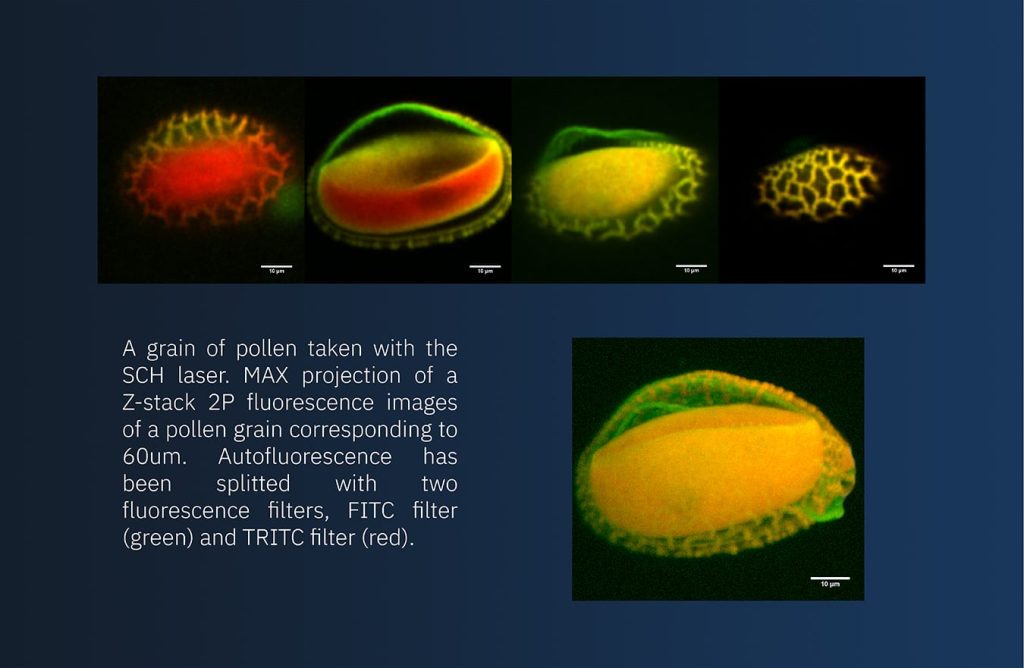 Not only the spectrum is broader but Cyclone also delivers shorter pulses. Combined with a dedicated state-of-the-art dispersion pre-compensator, pulses of the order of 15-20fs can be delivered on the microscope sample plane. This leads to an extraordinary peak power and an unparalleled photon flux at the sample plane, reaching more than 7-fold the photon flux of conventional femtosecond lasers with pulses in the range of 100-200fs. 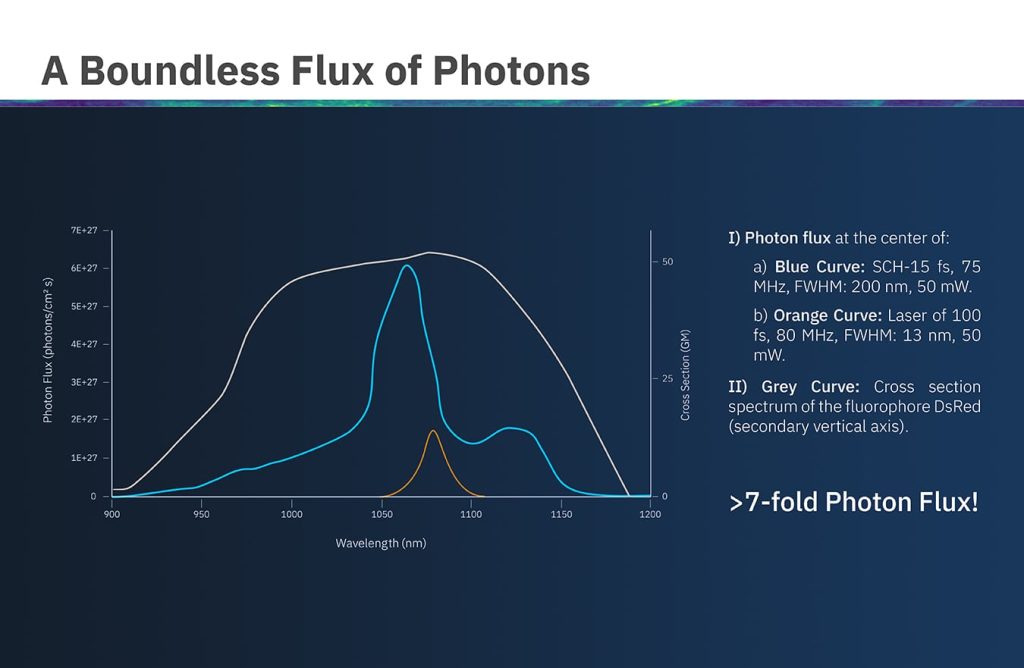 The larger photon flux associated to the superior Cyclone peak power leads to an increased number of photons that reach the sample per area and time. This enhances the two-photon excitation efficiency up to a 49-fold when compared with conventional fixed-wavelength or broadly tunable lasers with pulse durations in the range of 100-200 fs. When used with fluorescent label DsRED, over a 50% efficiency is achieved. 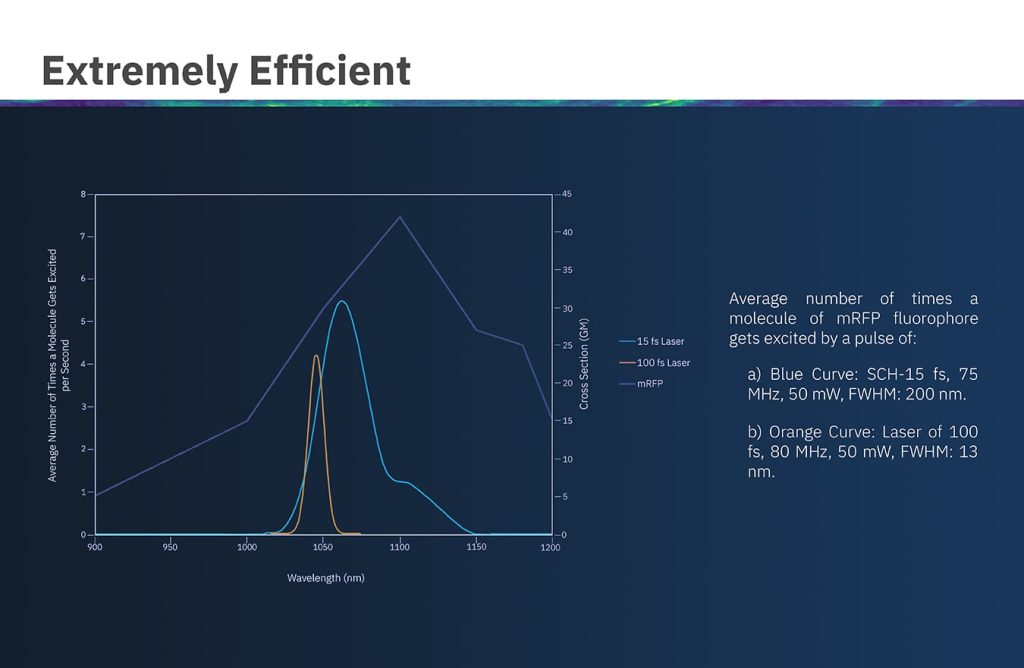 The red-shifted NIR wavelengths of FYLA´s Cyclone laser combined with the increased excitation efficiency leads to better image brightness and deeper penetration. A 200 microns deep sample of a zebra fish is simply imaged by the Cyclone laser. 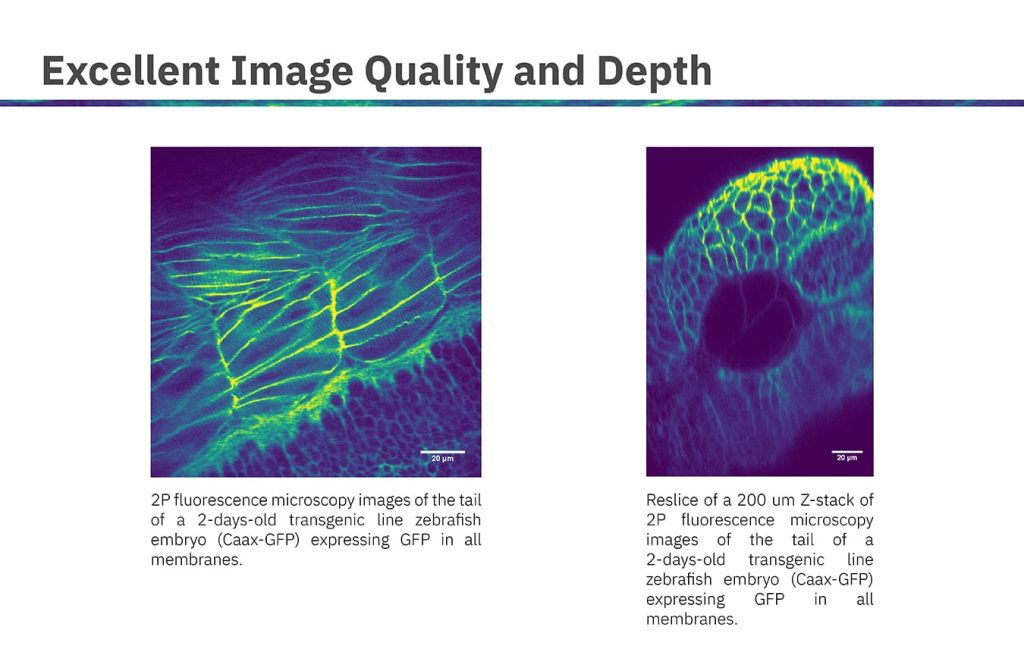 Cyclone broad spectral bandwidth not only enables the excitation of a large range of indicators but it also permits the multicolor excitation across the 900-1200 nm range with a single scan, making simultaneous excitation of different probes possible. This eliminates microscope alignment issues associated to broadly tunable lasers. 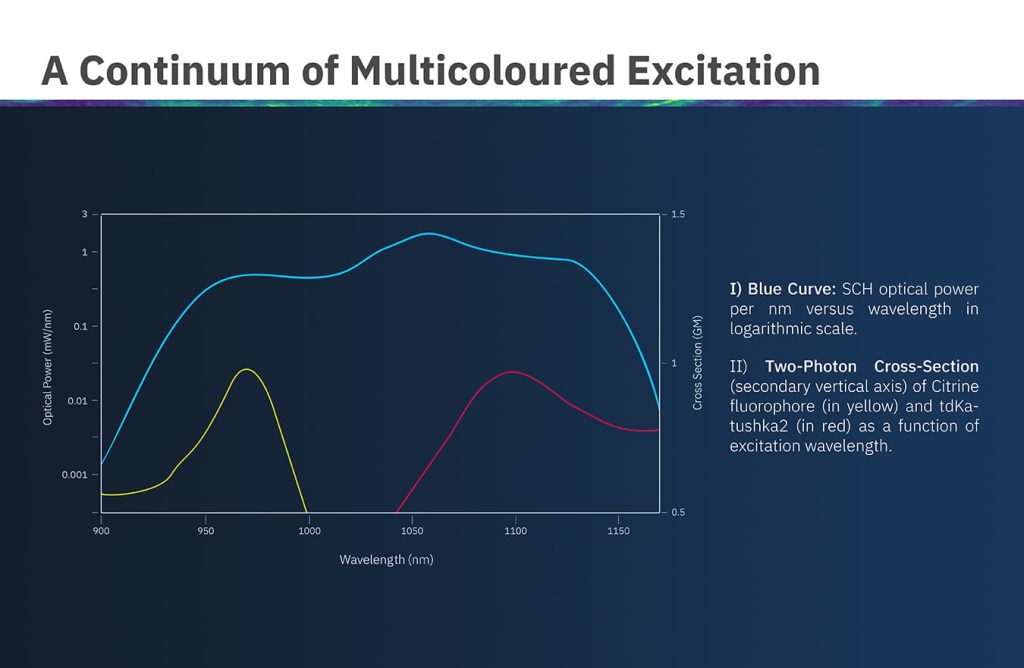 Images of a mouse intestine and a convallaria illustrate the great image quality that can be achieved when illuminating these samples with the broad bandwidth of the Cyclone laser. 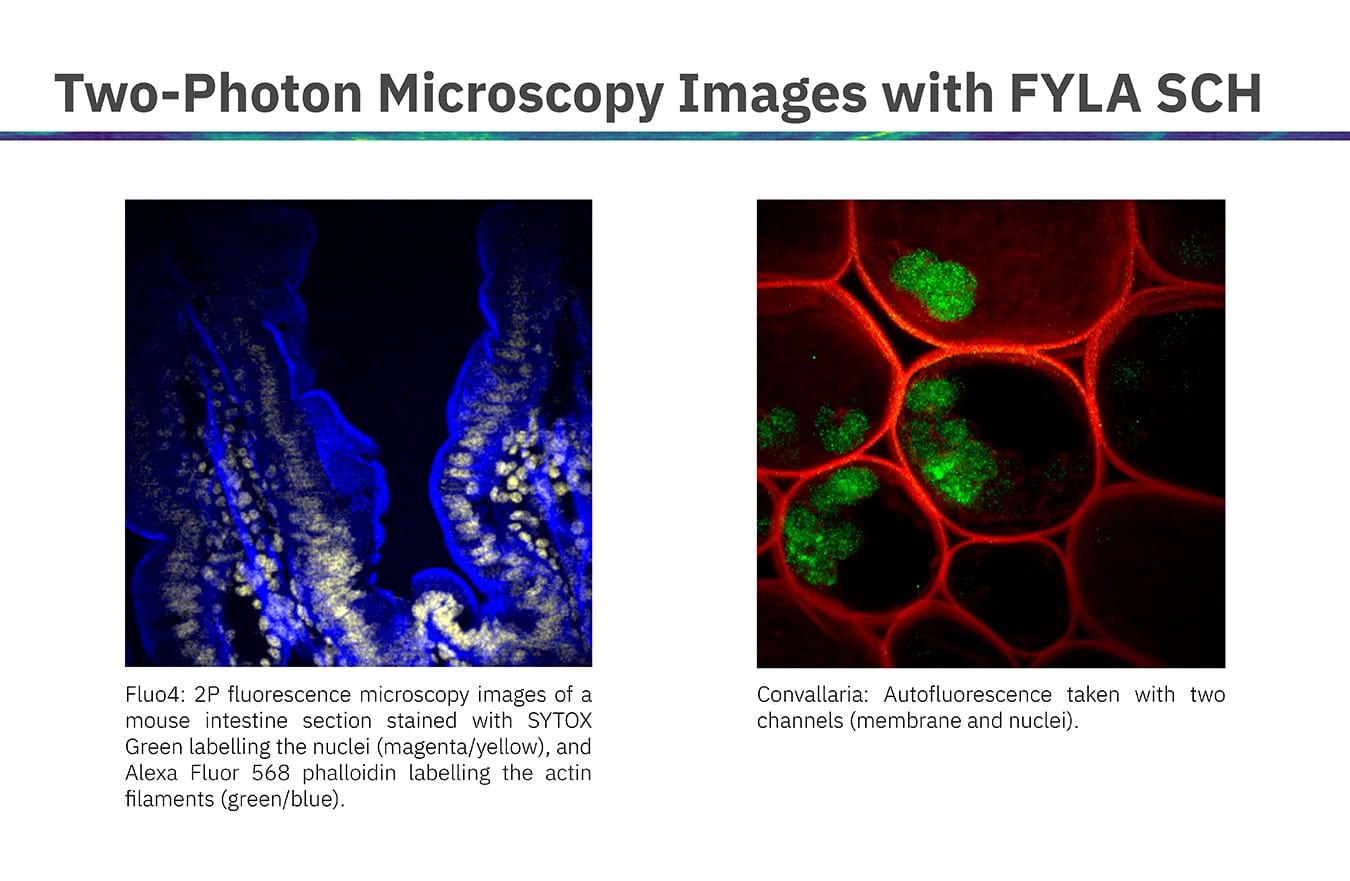 FYLA´s Cyclone delivers a bandwidth of 200 nm, across the 900-1200nm spectral range, with pulses of 15 fs and a repetition rate of 75MHz, enhancing two-photon excitation and enabling the individual or simultaneous excitation of bountiful indicators. 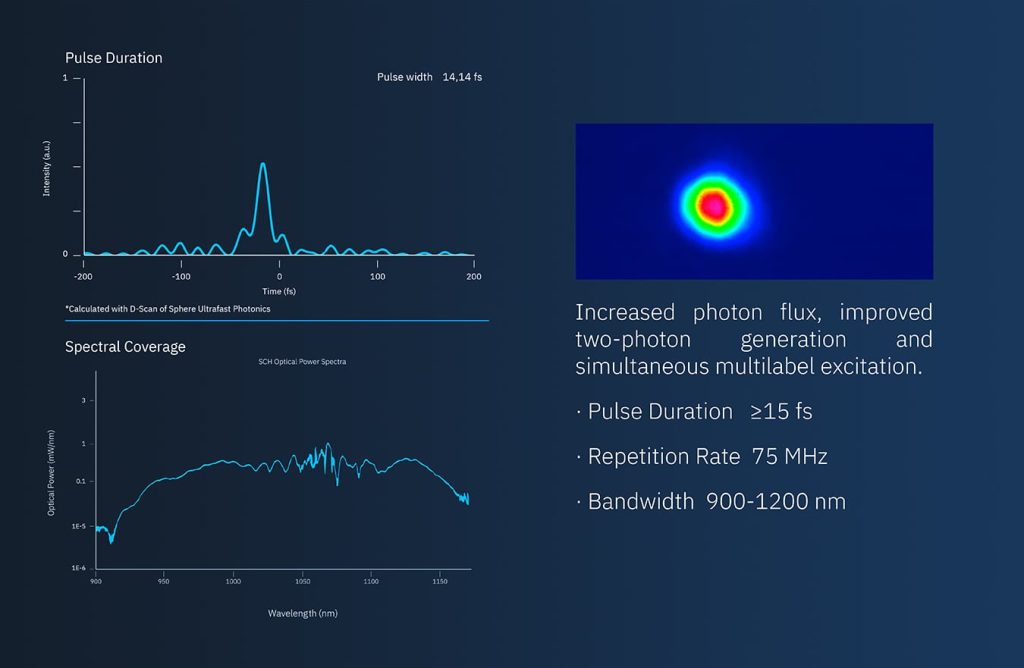 It is an all-fiber laser which is extremely compact, robust, and cost-effective.

Contact us if you would like to find out more about how this laser could enhance your two-photon microscopy images and advance your research. 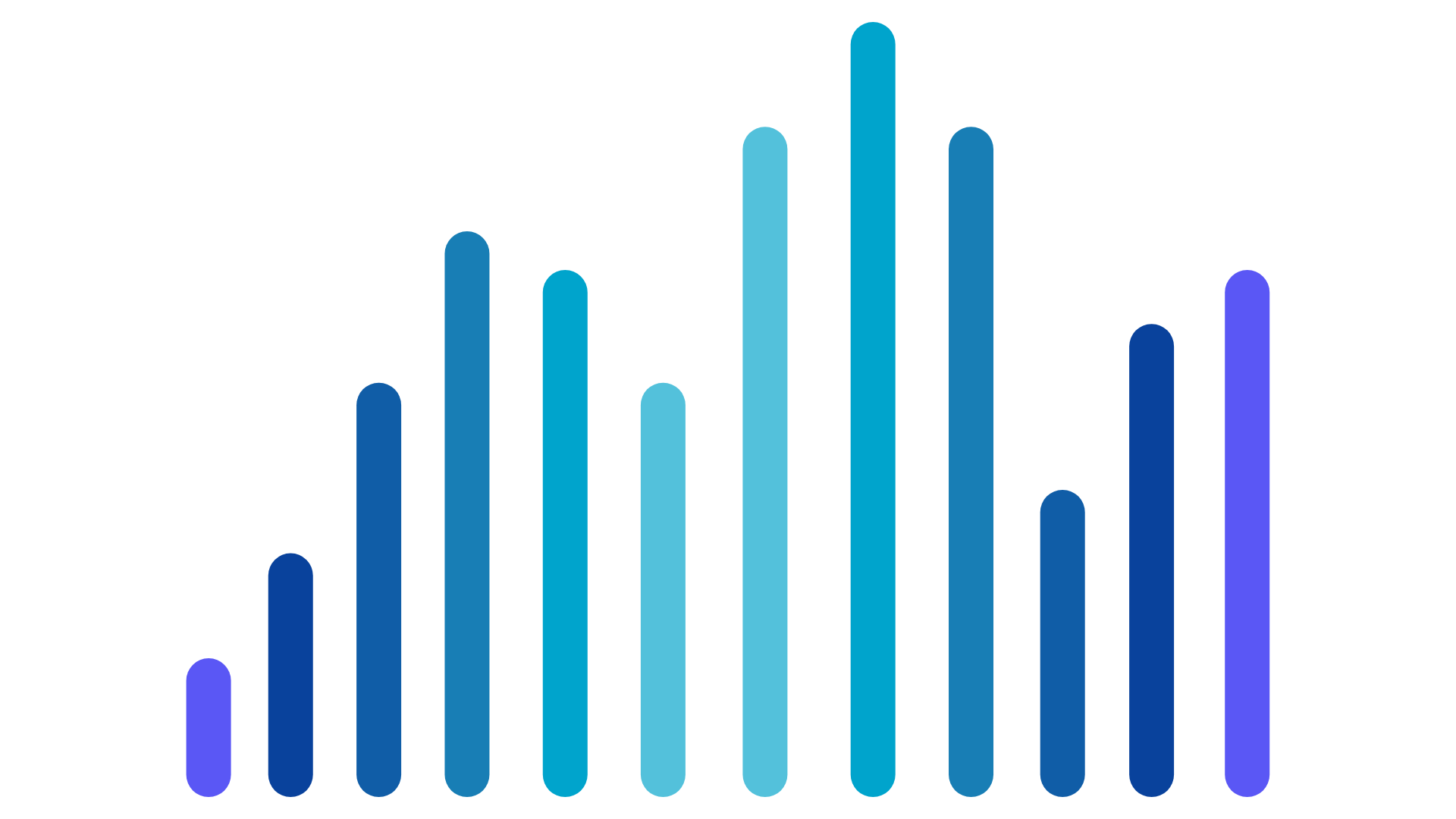 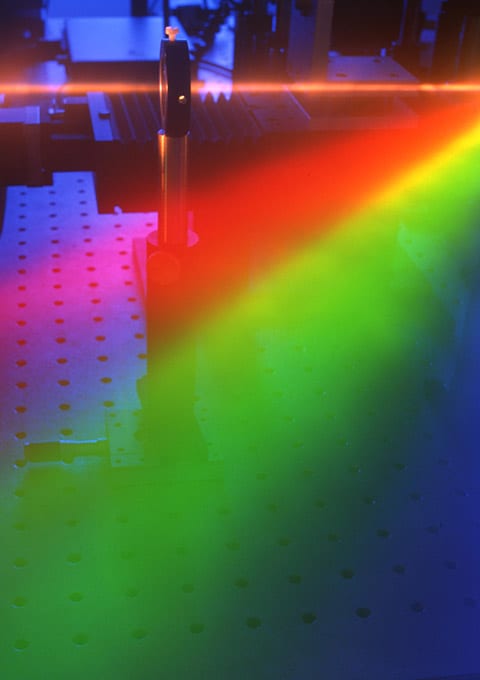 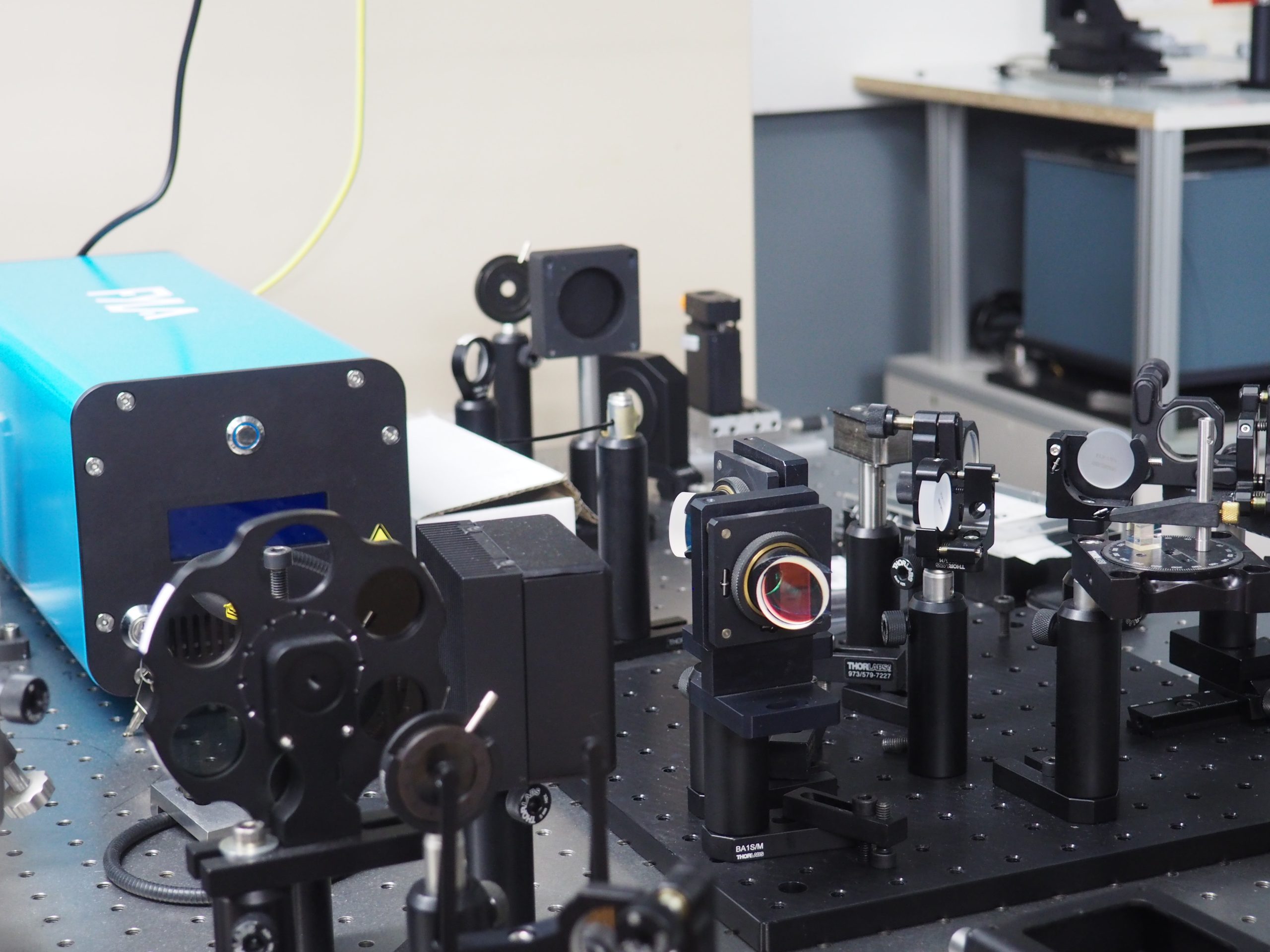 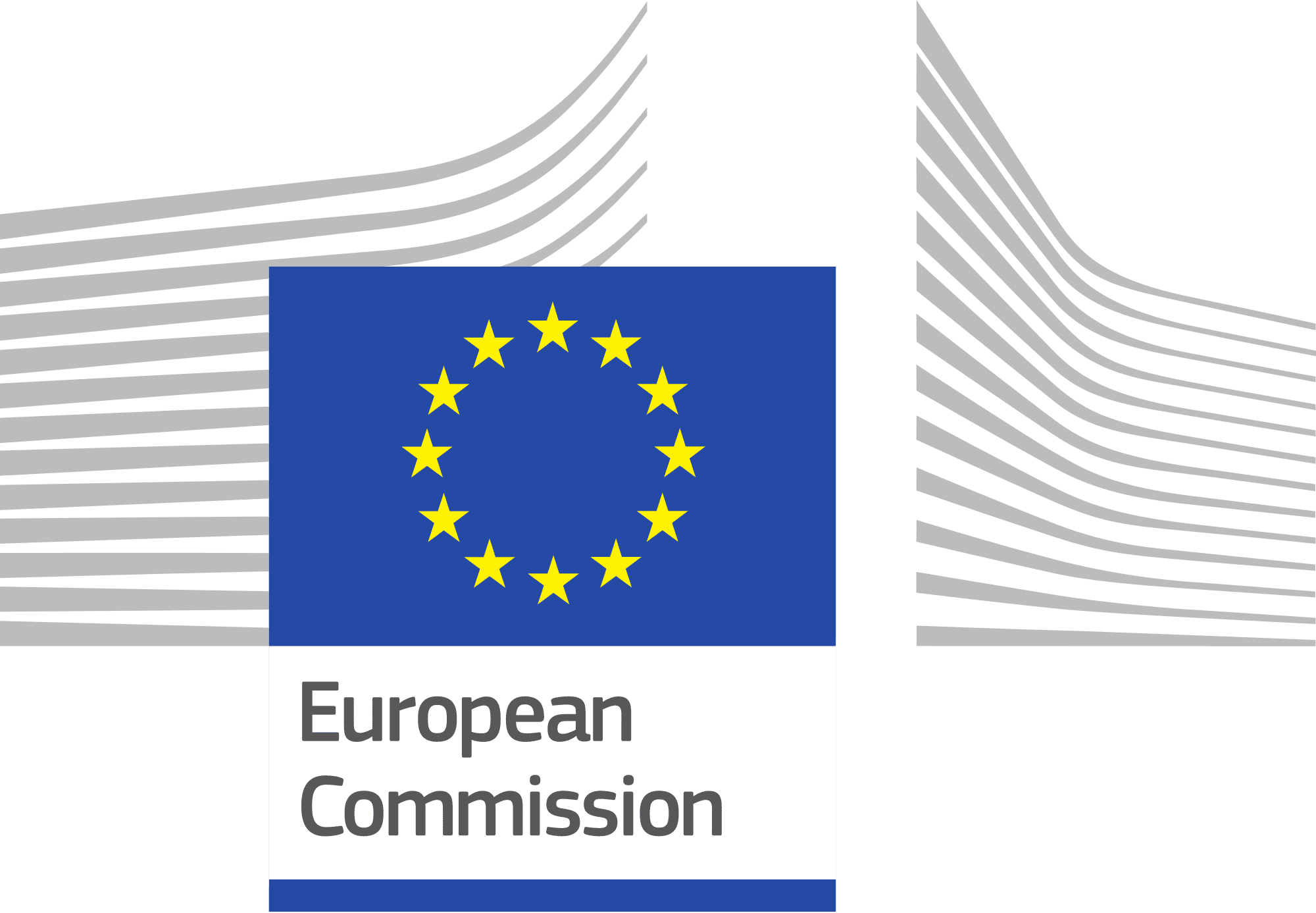